The year 2016 will indeed be a very memorable one for Open Air School with regards to chess.  Since the reintroduction of chess at tournament level last year the learners have grown in leaps and bounds. Our heartfelt thanks to Mr Moodley, the principal, for supporting us in everything we have undertaken this year for chess: for allowing us the use of the school hall and some classrooms for tournaments, coaching, meetings and award presentations. He was also instrumental in securing a sponsorship of R12000 for the learners who will be representing KZN in Gauteng in December. With a visionary leader like him, we are hoping to make him proud by trying to get a few South African colours in chess in the near future.

The highlight for this term was the two prize giving awards days.

The feather in our cap for 2016 was, as mentioned in Term Three, the selection of our ten learners to represent KZN at the South African Junior Chess Championships (SAJCC).

These learners were presented with special awards by the KZN Chess Association at a glittering awards ceremony held at Open Air School on 26/11/2016.

We would like to wish our learners the best of luck for the upcoming tournament which is taking place at Birchwood Conference Centre from 15 to 20 December 2016.

Lastly Open Air School would like to thank our coach Lulama for the sterling work he has done with our learners. He has taught them some amazing skills and techniques which have taken them to their current level of playing against rated CHESSA players. His valuable training sessions will definitely make at least a few players obtain their South African colours in the near future. 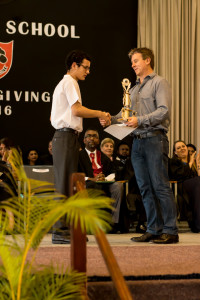